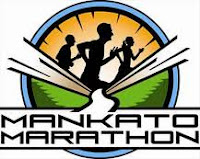 But no.  Somehow in 2012 I hurdled straight from a 7K, up to a Duathalon (run 3, bike 25, run 3), and right into a Half Marathon.  And then, I just kept right on going with Half Marathons, and straight into Marathon training.

Before I get too deep into the recap, you might be wondering... Mankato?  Really?!  Isn't that like ... out in the country?

Well, technically yes.  But keep in mind that I live in the South West Metro area to begin with.  So, really, heading down to Mankato isn't TOO much further.  Plus, my gym does the whole party bus to this race, and I ran it last year and had a blast, so...???

Anyhow!  So begins my race recap.

As is any race with me, the day always opens with two things:

Side note: how is it that I've evolved from the occasional holiday race outfit into full on costumes for pretty much every race?  I don't know... I guess you can just start calling me Edie.

To keep the hissy fit at bay, prior to this race I downed my usual pre race coffee and banana.  And in keeping with my tradition of running this race as a skeleton (is it really a tradition if I only did it once?  Hmmm...), I followed up my breakfast with this: 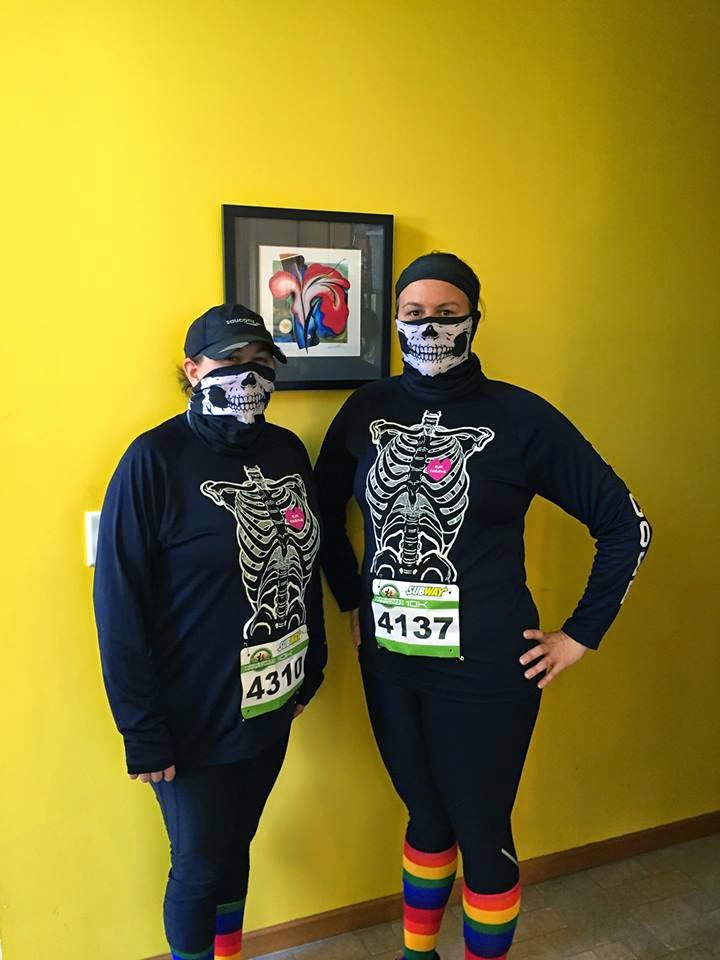 Oh, right, my sister.  Yep.  She planned months in advance to run this with me too.  Don't we make good twinsies?!

Well, twinsies except for this:

There is only one Unicobb.
*Imagine that said in a sinister, movie announcer voice.  I just did.  It was awesome.

Given the 4am wakeup call for this race, getting the above done on race day was a little ... slow.  I did mange to get out of the house on time, though, and was one of the first few on my local gym's "party bus".  Hoorah!

Like last year, given the early start to our day, the bus ride down was less party, more sleepy.  My sister and I chatted some to pass the time, and tried to keep warm since the cold air seemed to be seeping in every window crack and crevice.

Before we knew it, we were parked at the start line of the race and ready to use the porta-potties.  And for 2014, I experienced yet another new porta-potty way of life, the trifecta:

- In the dark.
- In the cold.
- With two guys standing just off my left elbow.

Yes, it's true.  For the life of me I cannot explain why, but apparently two men in their mid 40's were leaning on the corner of my porta-potty and chatting as I did my business.  A part of me thought of chiming in on their conversation as I occupied, but that was a little too gross even for me.  LOL!

Once I was done enjoying the porta-potty trifecta, my sister and I headed over to the starting area.

Although the weather on race day was much nicer than last year (given the lack of rain), it was still somewhat cold pre-gun.  So, I did something at Mankato that I've only one once before: used gear check.  Yes, you are probably amazed to hear that given the many cooler races I have ran.  I guess I'm just OCD and try to avoid checking stuff as much as possible.  However, given I wanted to hang out at the finish line post 10K and cheer for my friends running the half, I decided it would be in my best interest to check something to keep me warm post gettin' my sweat on.

The gear check process was very fast and efficient, which meant we had an unfortunate amount of time to kill until the 7:30 gun.  Luckily the crowd was large and there was a sizable gap right in the center.  My sister and I snuck right in the gap and enjoyed the free insulation while we waited.

As we awaited the gun, I started up my GPS, and the two of us listened to announcements.  Apparently, just before we were due to take off, someone else was just coming in.  I don't know why, but a man had decided to run the marathon course in reverse - STARTING AT 3AM - and at about 7:20 he was just rolling in to the start corral... SO THAT HE COULD TURN AROUND AND RUN BACK AGAIN.  On the marathon course.  Two marathons in one day.

I can't explain this level of crazy, so please don't ask.

Anyway, I marveled at his commitment, took in the national anthem and - BANG!  Time to run.  With drones circling over head filming us, of course.  (I wonder if that video will make it on Youtube soon?)

I was eager to get out on course ASAP and get moving, since I had ran the half last year and wasn't sure how the 10K course would differ.  In the first mile, actually, both were exactly the same.  It wasn't until the first rolling hill of the Half Marathon that things switched up: while the Half Marathon would crest their first hill about a half mile past the 1st mile marker, we would only partially climb the hill and turn right into a neighborhood development.  From there on out, the course was totally different.  Although, interestingly, very similar in feel.

I say they felt similar because like the Half Marathon, the first 3 miles of the 10K were a set of steady, rolling but easy climbs.  And like the Half Marathon, the last half of the course was a nice downhill coast into "downtown" with a flat stretch to the finish.  The finish for everything was the same, too, with the only difference being that the Half joined the main drag of Mankato down by Burger King, whereas the 10K joined down further by the Dairy Queen.  The final 3/4 or so miles of the course were the exact same for all races: 10K, Half and Full Marathon. 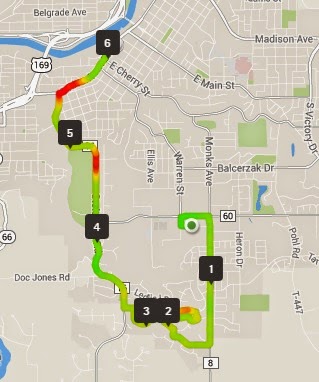 Although the course felt very similar in elevation, and was equally as beautiful with the fall colors, I noticed that I was a little spoiled by the half route in 2013 as soon as I hit mile two.  I much prefer the country side running on the Half course as opposed to the urban feel of the 10K.

Not to mention, the 10K course was much less spectated, and thus less entertaining.

However, on the up side, the additional buildings around us meant less wind, which I gladly accepted.  Especially in the first three miles when I hadn't quite warmed up and was missing my wicking jacket.

My sister and I enjoyed our run and chatted as we went, only stopping to walk the water stops at about mile 2.5 and mile 4.5, with a final walk break just after the 5.5 mile mark (due to some minor knee pain my sister was having - a quick stretch and a short walk, and we were good to go after that).  The entire time, I was pleased that my feet issues didn't seem to be bothering me, and I never needed to stop because of them.

Despite or walking, you can see that we kept a fairly level pace, too ... aside from the final mile where we took the walk/stretch break:

Somehow, though, the splits show up a little uneven on the breakdown.  I don't know why: 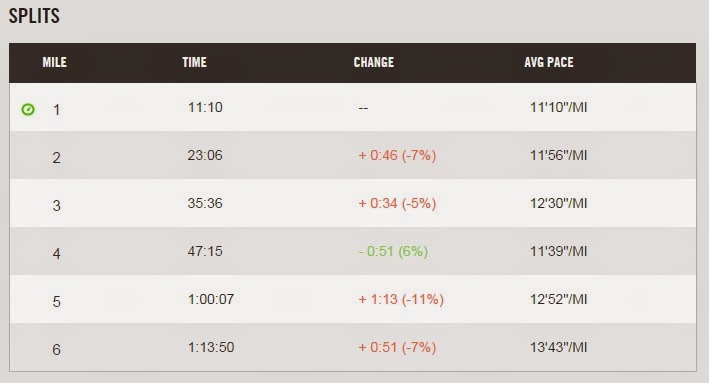 When we joined the "main drag" / final stretch coming into the finish line (by the Dairy Queen), I recalled my finish anticipation from last year.  Since the street follows an S shape the last 1/2 mile or so, it seems like you will never make it to the end, being that you can't see anything in the distance.

And then all the sudden you round the final bend in the S and you see it.  The finish line.  And ... you're done!

Well, unless your sister tries to slap you in the face and keep you from finishing first.

Actually, what happened is: I proposed we jump at the finish for the photographer and didn't clarify timing.  I jumped and was already coming down to land as my sister was going up.  Somehow in the tangle, she managed to get her arm out in front of me and catch me in the face/chest.

It really felt like a true sibling rivalry, my sister trying to hold me back from the finish so she could come across first.  I imagine it looked something like this: 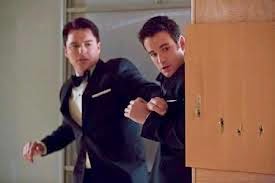 Official race photos aren't up yet, but assuming the photographer caught us, I'll be sure to share that picture perfect finish in a future post.

Of course, as soon as we crossed the finish, we were ready for this: 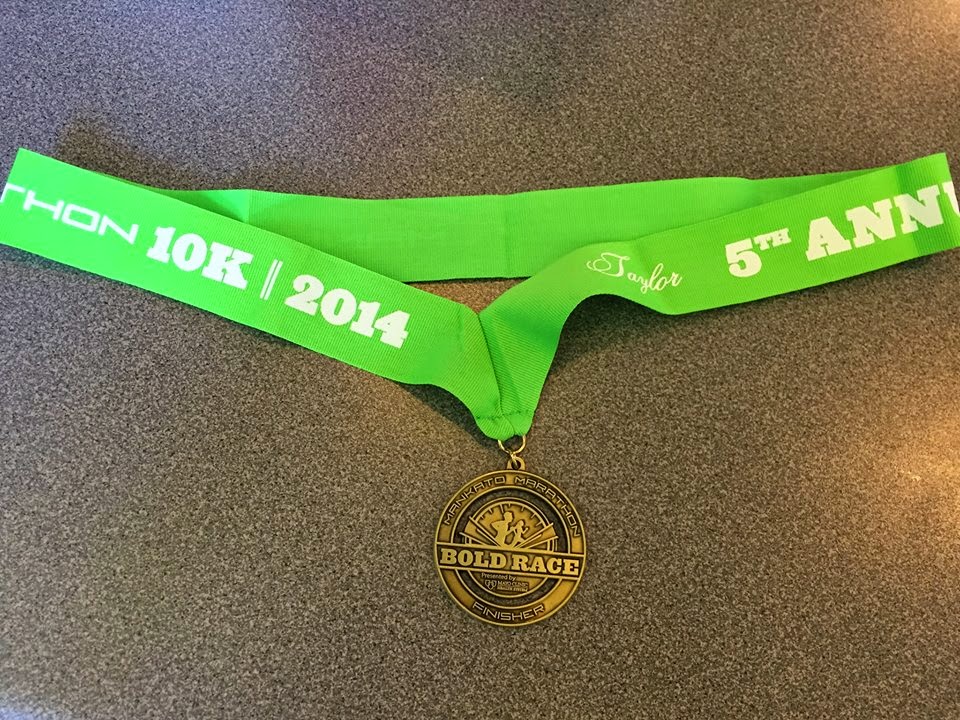 We also stopped at the food tents to grab a few standard post race snacks (bananas, bagels, potato chips, water, Gatorade, etc).  Somehow, though, we missed the beer tent.  BOO!
After getting our desired treats, we headed back towards the finish line to watch the last few 10K runners come in.  Not too long after, the first few Half Marathoners came in too.  That's when the fun began, I just love cheering for people I know, and I caught about half of the runners on our bus.
Eventually, I couldn't take the cold anymore and decided to head back to the bus.  Where I was greeted with a FANTASTIC post race party spread and camaraderie all around.  And of course, it required the obligatory group photo: 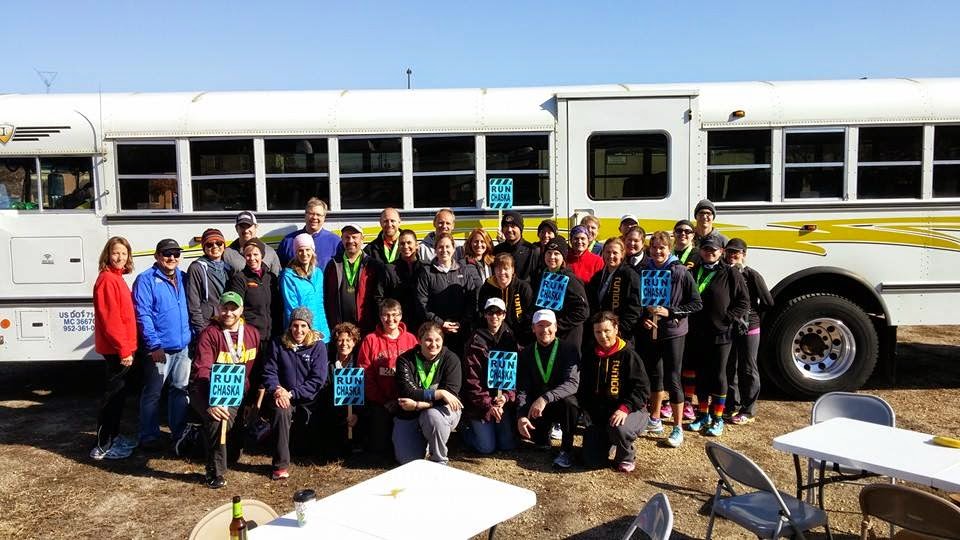 A few fun party games (with prizes!!) ensued as we enjoyed our food and our company ... and eventually it was time to board the bus and head for home.
﻿ 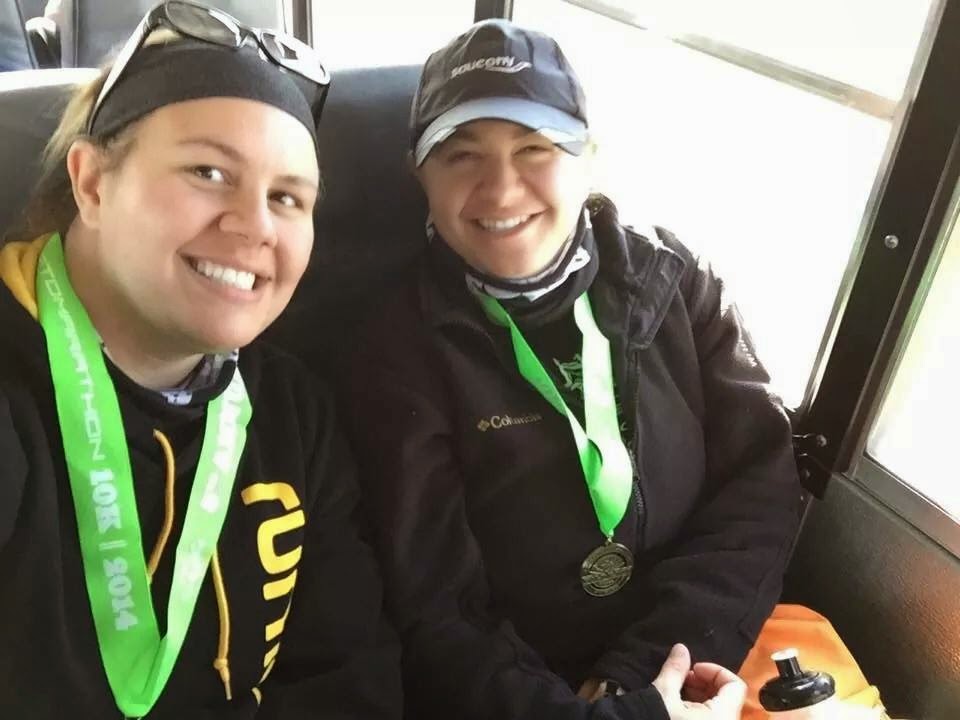 Which I wasn't too sad about, because it meant I got to go home, shower, and put on this: 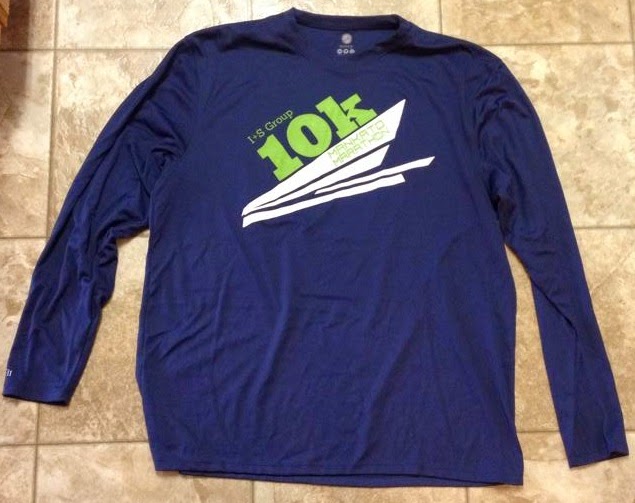 And the fabulous post-race party prize I won: 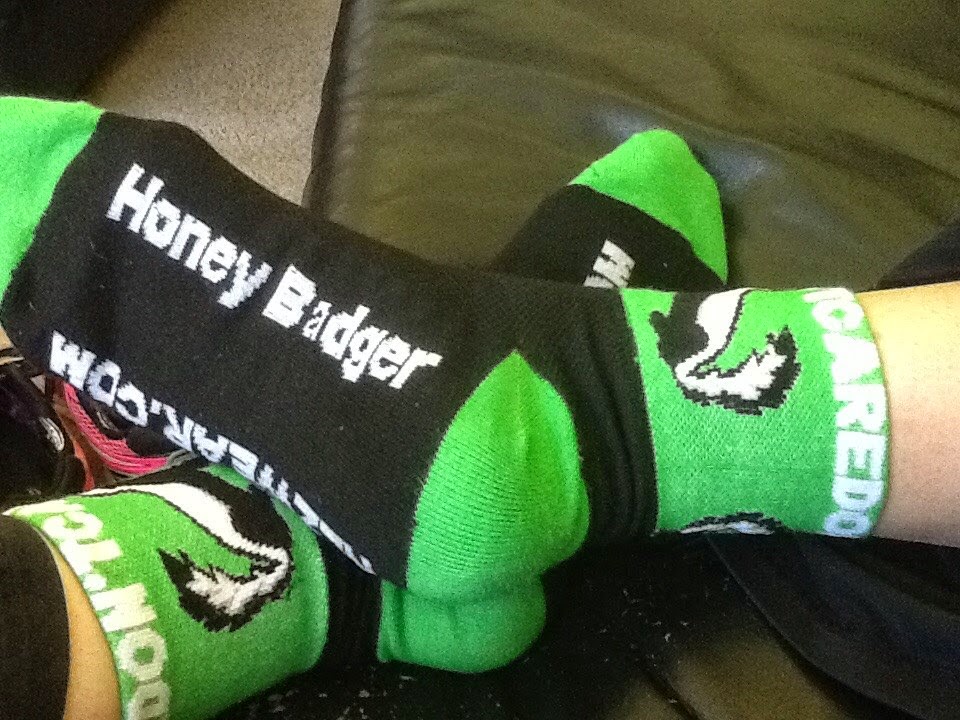 A little later in the day, race results were finally posted, and I was quite pleased.  Although a 12 minute per mile pace may not seem like a big deal to seasoned runners, it was 30 seconds per mile faster than my sister's usual pace - and on her longest course yet.  Given that the last time I set her up on a training program she suffered a stress fracture, I felt somewhat redeemed that my suggestions (and her hard work, of course) paid off.

Plus, I was super happy that I managed a 6 mile run with my plantars feet.  Despite the fact that I was hobbling a bit post race, that quickly righted itself after a night of stretching and a Monday morning wake up call.

Which makes me realize, I need to stop making excuses and get back out there.  I've been way too lazy with my running in the last 6 months, and it's time for a change.  Let's see how the next 6 months go!

And that's the story of how race bib #51 joined my collection.  Here's to another race soon...
Thrown down by Shinianen at 2:00 AM

Shinianen
I'm a group fitness instructor, runner, bike commuter and skier with a sense of style... and humor!